I can only see the darkness, I try to climb out, and I try to reach the end of this tunnel. I can see the light, I am almost there. The ghosts try to stop me, the wind almost knocks me out and water drowns me, but I know I can make it, at least I hope I can.  I reach out, one more step and I am out. But, it pulls me back, I struggle, I shout, I scream but in vain. It’s powerful, more powerful than my will, I can’t fight it anymore, I submit to its strength and it takes spiraling me back to my darkness. Another day gone in vain. My depression had won again.

The dictionary simply defines depression as- feelings of severe despondency and dejection. But, what we need to realise is that depression is not simply a feeling of dejection or despondency, it is much more than that. It cripples one’s mind and leaves one with no life or soul.

A psychologist usually defines Depression as- a period of severe bad mood accompanied by loss of pleasure in any activity, changes in weight, social withdrawal, feeling of regret and guilt, and suicidal tendencies.

For a depressed individual getting up every morning becomes a challenge. For him or her life is worthless and hold no meaning or purpose to him. He can be compared to the living dead or the ones with no soul. Depression is also accompanied my negative thoughts which further brings out the individual. All one can think about are his mistakes. The person is surrounded by darkness which slowly starts to engulf him. He reaches out but to no avail.

Depression can be called the cancer of the mind, however it is harder to treat. One of the main reasons for that is lack of support or social acceptance. To make matters clearer- if someone recently had a bad break up and she is depressed, most of us just laugh it off and say that time will heal everything. We believe that the cure for depression is going out with friends or just simply giving it time. We fail to understand its severity and hence, depression goes unrecognized till it reaches a level where the person may take a drastic step to get out of it. In many countries, especially India, most choose not to even reveal that they have depression as they already know the reactions- ‘oh no, you are not depressed, it happens with everyone. Give it time and go out to enjoy’ or ‘get a hobby, don’t think about it. Distract yourself’ or ‘these things happen all the time. Think about the people who can’t eat, are you worse off than them’. Hence, aware of all these reactions the victim (yes depression is a killer) puts on a fake smile and goes about his life, and all of his near and dear are unaware of the battle going on within him. ALSO- a) Time doesn’t always heal depression- therapy does b) it’s hard to distract yourself as no matter how hard you try, the thought keep recurring back to you. It’s not that easy c) for a depressed person others don’t matter, for him his biggest problem is his own problem. Asking one to think about if they are worse off than a said group does not solve the problem. In some cases it makes the matter worse as now he starts to question himself-‘I know they are worse off, and my problem is so small relative to theirs’, then why can’t I get out of this?’ all these questions increases the turmoil within him and makes him feel selfish and uneasy. 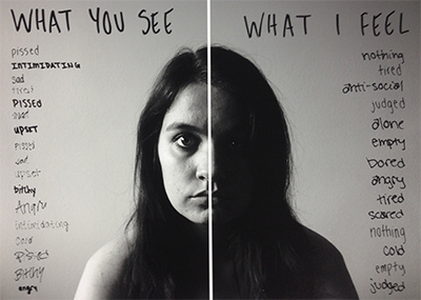 Contrary to believe depression can strike anyone and anytime. A person may be depressed because of a loved one’s death or maybe due to a break up. With the growing use of social media cyber bullying and the need for public validation also leads to depression. The reason of depression can be anything, it depends on the person’s mental strength, past experiences and resources available. In India the academic pressure on students also leads to many developing depression.

Psychologists believe that there are some factors that predispose depression-

The statistics in India suggest that depression in on the rise I the country. The National Crime Records Bureau (NCRB) statistics reveal that a total of 1, 35,445 people committed suicide in 2012 which amounts to an average of 15 suicides an hour or 371 suicides daily. Maharashtra ranked second on the suicide index with Tamil Nadu topping it. These numbers are jarring as it shows how much depression or mental health is neglected in India. The lack of proper institutes aggravates the problem. The suicide helpline are also futile as like our police (100) no one ever picks up.

India recorded the highest rate of major depression in the world, at 36 per cent, and Depression affects over 120 million people worldwide. It can interfere with a person’s ability to work, make relationships difficult, and destroy quality of life. In severe cases it leads to suicide, causing 850,000 deaths a year. It is reported that 26, 00, 00,000 in India suffer from mental disorders.

To find a solution to depression, we need to treat it like we treat any other chronic disease. One needs to understand that it is nothing to be afraid or shames of. To cure depression we first need to cure our attitude towards it. We need to be on a look out for early signs of depression and make sure we support the person rather than advise him or her as to how to combat it. We need to empathise and not sympathise with the victim, and most importantly we should take him or her to a therapist immediately.

Also I would like to end this post by saying to all those who are depressed or sad or feeling hopeless is- keep trying and never give up. You are not alone in this. You are a beautiful soul so try not to lose hope and fight that demon and show it that you are the boss and you and only you has the right to control your mind and no one else. And I know one day, soon enough you will take a step out of that darkness and into that light and on that day nobody can pull you back into the abyss.